While viewers of Super Bowl LII on Feb. 4, 2018 at US Bank Stadium may not notice the exceptional flatness of the field, the crew from Park Construction will know they notched the first NFL win at the stadium.

High fives and handshakes celebrated a victory four months before the opening kickoff of the 2016 NFL season at US Bank Stadium in Minneapolis. The reason for the cheering? The paving crew had met the demanding flatness specs set by the NFL for the stadium bowl’s asphalt base.

Park Construction, the Minneapolis-based asphalt subcontractor at the new home of the Minnesota Vikings, placed an asphalt mat that varied less than 1/8-inch over a 10-foot by 10-foot area the entire length and width of the field.

NFL officials tested the mat’s flatness with a 10-foot long straight edge after the two-day paving job in late April.

“When he started pushing the straight edge up the joint, which is potentially our worst spot, he just started raving about the quality of work. And then his boss started running the straight edge north and south for a few minutes, and it was the same thing. Then it was high fives and handshakes through the entire group,” says Paul Plieseis, project superintendent. 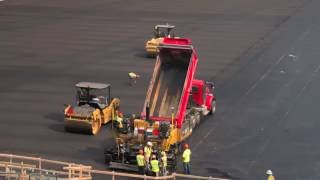 The use of 3D paving helped the Park Construction crew quickly place a high quality surface. “I’ve changed my view of how tightly we can dial in the customer’s tolerances,” Plieseis says.

With 3D paving, asphalt is placed based on elevation. The 3D paving system utilizes the Trimble® Total Station and software onboard the paver to compare the screed position and slope with a digital design of the project.

A Cat® AP1055E Paver with an AS2302C Screed laid down the mix. AccuGrade™ PCS900 is integrated with the Cat Grade Control factory 2D system. The AccuGrade PCS900 is an overlay system that does all of the required 3D calculations, and then transmits the information to the paver’s 2D system. The 2D system then drives the machine tow-point hydraulics to the height specified by the 3D system.

To determine how to tie in asphalt to concrete features already in place at the stadium, Shawn Bloch, GPS Survey Manager for Park Construction, shot the elevation of existing concrete with a transit. He found that four elevation marks on concrete walls were within about an inch, plus or minus, of 104 feet all the way around the bowl. This wasn’t close enough for the tight tolerances required for asphalt paving.

The actual elevation had to be adjusted at the four points. “When we reset to the actual coordinates, that brought us within our tolerance for our control,” Bloch says.

Creating a 3D model of the site to download into the paver took Bloch approximately one hour. “For this project, we had three elevations. We had one elevation for the top lift of asphalt, one for the top of the base course, and one for the gravel surface. It was pretty quick and simple,” Bloch says.

Before asphalt paving could begin, approximately 75 tons of aggregate had to be removed from the bowl. Hard, packed aggregate, ½ to ¾ inches in diameter, was ripped and then graded to elevation.

Park Construction had one week to complete grading. A Cat 160M Motor Grader outfitted with 3D grading, which eliminated the need for shooting grades and grading stakes, completed the work in 3 ½ days.

The 3D paving job was a first for Park Construction, and some techniques needed tweaking.

Steve Devlaeminck, a screed operator since the 1990s, had been taught to keep the tow point centered at zero. “We started out paving with tow points in the center at zero, and we noticed our mat was going up and down,” Devlaeminck says. “We made adjustments to correct that.”

Steve Goutermont, a Caterpillar Paving consultant, mentioned that performance is improved for this paver and screed combination when the tow-point is positioned at zero-plus-paving-thickness and the angle of attack is at ¼ inch.

“IT WAS SMOOTH, NOT A ROLLER MARK OR ANYTHING. THAT’S BECAUSE OF THE 3D PAVING SYSTEM THAT WE USED. THAT’S THE FLATTEST, SMOOTHEST SURFACE I’VE EVER SEEN. IT LOOKS JUST PERFECT.”

“Once we changed the tow points and maintained our paver speed, we could see the results instantly. Everything settled down and we started getting a nice-looking mat,” says Devlaeminck.

Wayne Dilley, paver operator, says his top priorities were keeping the paver as straight as possible, stopping exactly when elevations were checked, and keeping a consistent head of material.

“I knew my head of material was good, but we had to stop and check our elevations. Instead of stopping slowly and checking, we stopped right away. Then we went right back up to speed. That was a crucial part of ensuring the mat laid was nice,” Dilley says.

Park Construction placed approximately 3,000 tons total for both lifts. The first lift was 2.5 inches compacted, and the second was 2 inches compacted. Compaction coming off the back of the screed was 89 percent.

The team met the challenge of paving a stadium bowl that is oval-shaped, and includes concrete drainage and other details like conduit for end zone cameras.

“The first couple of passes around the stadium, the biggest issue we had was matching into the concrete that was in place, getting by the gate valves and catch basins that they had in place, and trying to match the surface with those elevations or those items,” Bloch says.

Dilley says, “As a paver operator and screed operator, we like to keep our screed at the exact same width if we can. That wasn’t possible.”

Communication with the screed operator was key to keeping the initial starting pad at the correct elevation. “I started to give the guys grades on the pad that we would start on, and made sure that that was at the elevation where we needed to be,” Bloch says. “I kept shouting out numbers to him, if we were high or low.”

Tolerances were close after the first day of paving, which set a benchmark for second day adjustments. “On Day Two we dialed in an exact paving speed, we paved at that speed all day long, we knew exactly where our head of material had to be, and we kept it there,” Dilley says. “Everybody was on their A game. That's probably one of the nicest paving jobs I've ever seen in my life.”

After the first day of paving, a topographic survey was done of the entire site. “We could see what we needed exactly for thickness on Day Two. And then they came up with a compaction factor so that we could hit that exact elevation across the entire project,” Plieseis says.

Measurements showed three low areas. “That's where I think the Trimble Software was really helpful.  It was able to tell the paver that there was a low area coming up, so the screed could start making the adjusting before it got there,” Devlaeminck says. “The 3D system allowed for highs and lows and for compaction. The end result, we hit the numbers right on.”

Park Construction also had to meet the challenge of a high profile job, with numerous subcontractors working simultaneously.

John Lenarz, paving supervisor and superintendent, says, “There were a lot of eyes on us. We’re doing something that nobody in the industry has done before—putting an asphalt layer down underneath an athletic field.  With that and just working with all the other trades and contractors on the site, the logistics of moving about and getting your work done, it was challenging.”

"The support that the paving crew and myself received from Caterpillar, Ziegler Cat, and Trimble was crucial. It was truly a team effort," says Lenarz.

Morning meetings with prime contractor, Mortensen Group, included logistics of getting asphalt trucks in and out. “They would ask how many trucks for the day, how many tons for the day. They wanted to keep us moving along with our work, and maybe reroute some of the subcontractors to a different day,” Plieseis says.

Hot mix left the asphalt plant at 280-290 degrees Fahrenheit, and the goal was to have mix delivered to the site at 250 degrees Fahrenheit. “We had several laborers staged throughout the project to flag traffic, and make sure trucks weren't sitting on the street an excessive amount of time and that they could back in safely,” Plieseis says.

A Cat CB66B Steel Drum Roller running at low amplitude and high frequency was used for breakdown, with 90 to 91 percent compaction. A PS360C Rubber Tire Roller, and a CB64 Roller aided in compaction. A CB24B Roller (three-ton) served as finish/touchup roller. Final compaction of 93-94 percent exceeded the density targets of 92 percent.

In the end, the paving job was picture perfect. Before leaving the stadium, Bloch took several cell phone photos of the finished product. “It was smooth, not a roller mark or anything,” he says. “That’s because of the 3D paving system that we used. That’s the flattest, smoothest surface I’ve ever seen. It looks just perfect.”

3D paving can save time and money. Find out the top five benefits.

The AP1055F is a high-production, rubber track paver that excels on airports runways, interstates, highways, and other large jobsites. It's high travel speed, flotation, and traction deliver superb mobility. 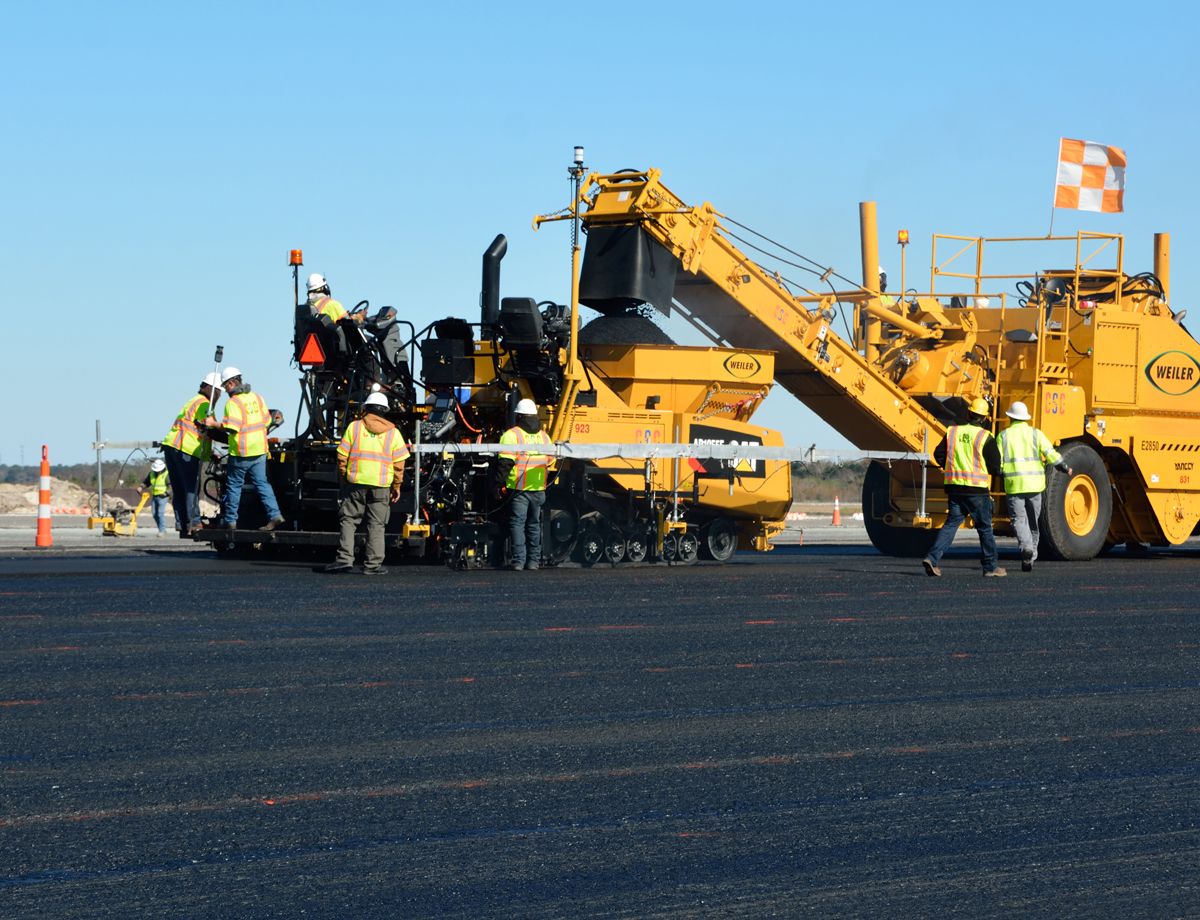 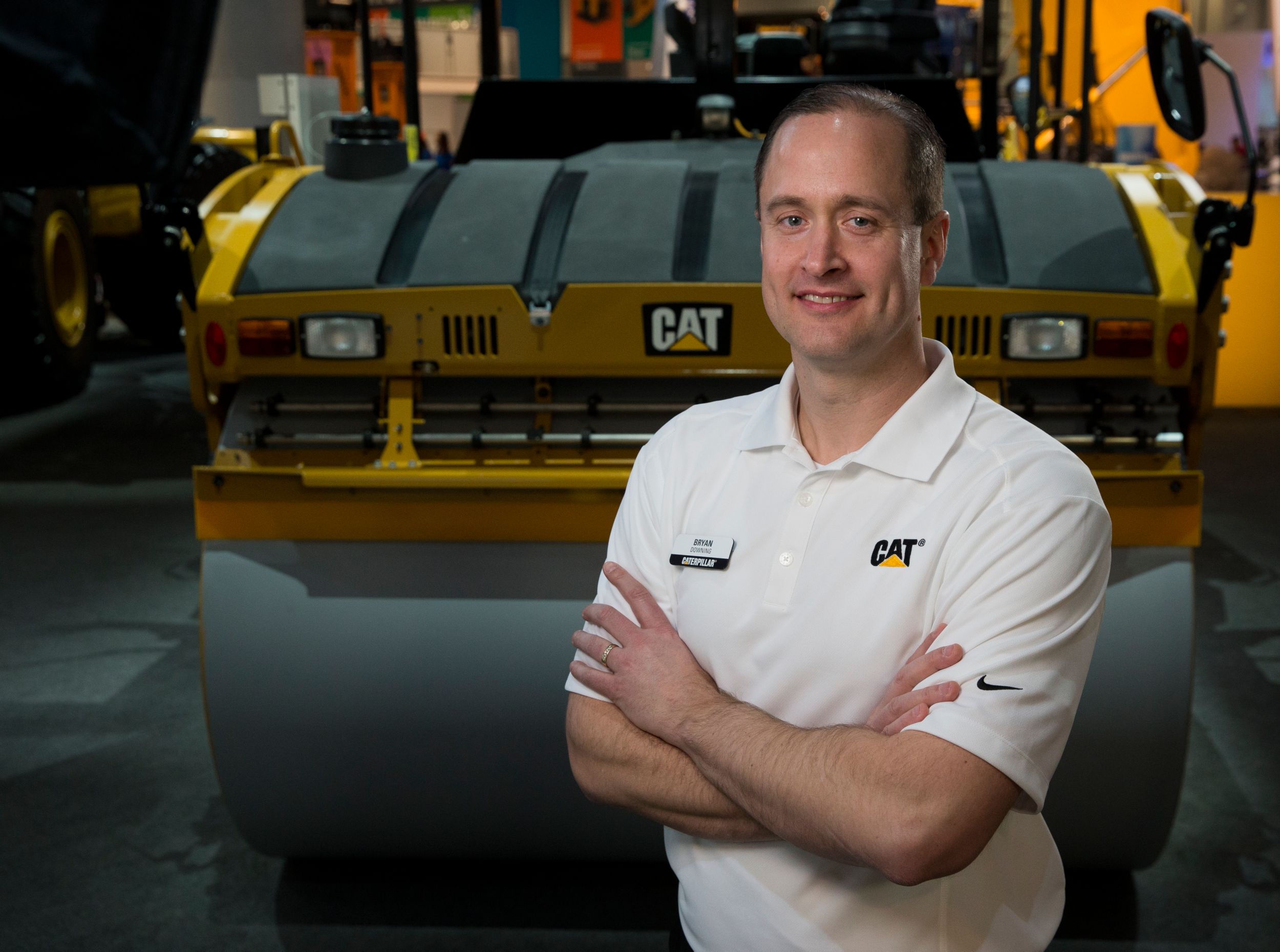 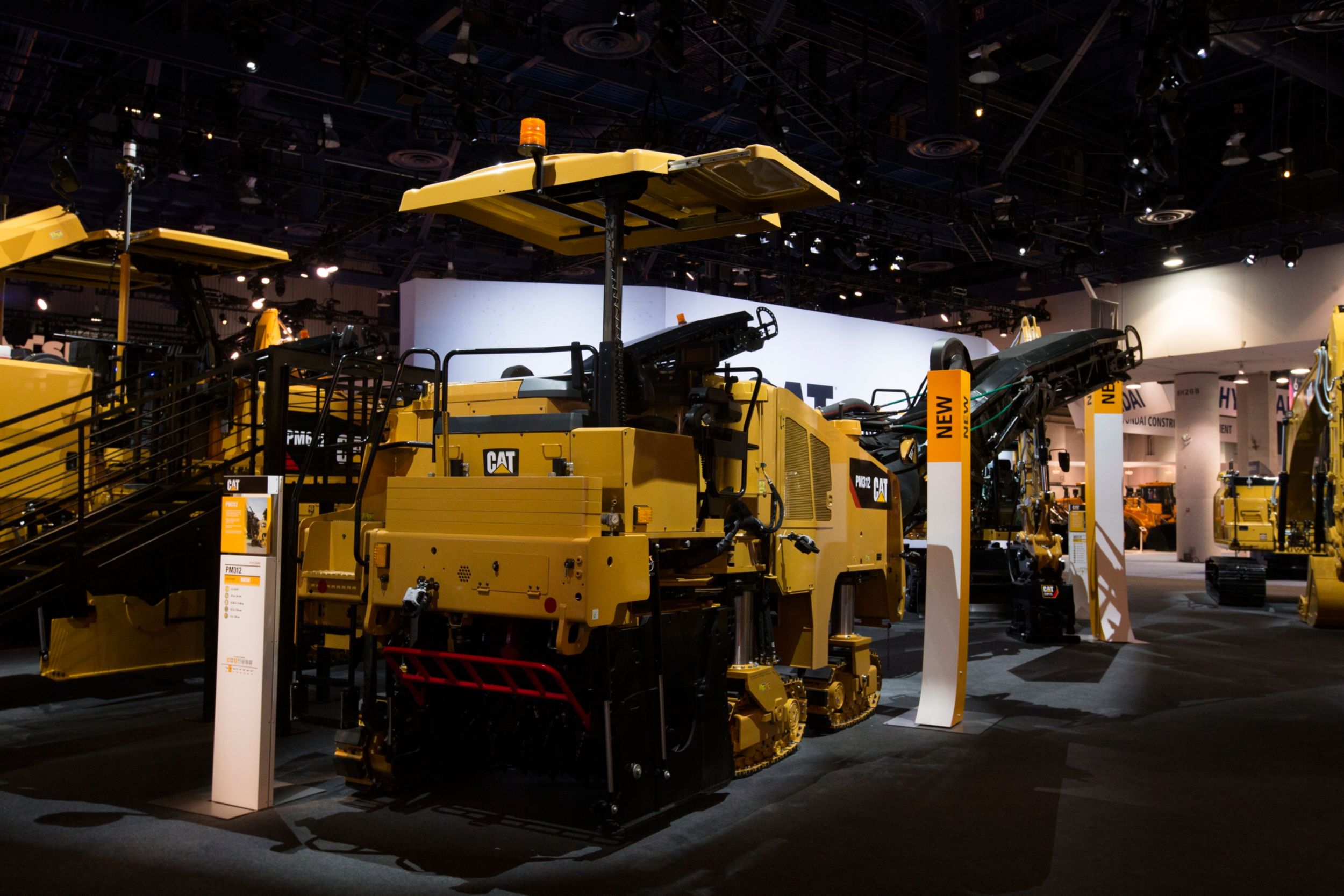