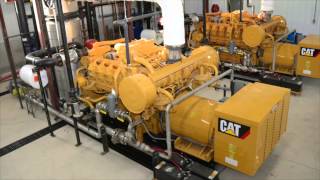 Based in Plymouth, Indiana, Homestead Dairy began as a modest family farm with only 110 cows. In 1979, brothers Floyd and Dan Houin purchased the farm from their dad and turned it into the massive dairy operation that it is today.

The dairy now hosts 1,800 milking cows and 300 dry cows, while an additional 1,700 cows come in from three nearby facilities for milking. However, with continued success and expansion also comes a growing concern for the community. Increased cow numbers means more manure, and more manure means more odor surrounds the dairy, which directly impacts the nearby residents.

Floyd Houin started researching ways to reduce the impact of the odor from cow manure by analyzing several farming operations in northern Indiana and southern Michigan. He determined that building a biomass waste-to-energy facility to convert the manure into electric power was the direction he wanted to take.

After the waste-to-energy facility was in development, Homestead Dairy had to identify an electric power system that could anchor the biomass facility, while generating enough electricity to maintain the NIPSCO agreement.

During the research phase of the project, Houin toured a farm with a renewable energy facility that ran on Cat® generator sets. He learned that the system continued to operate at peak efficiency with few problems even though the generator sets were older models, so dependability became an important factor.

“At some point, the generator sets are going to need service, so you’ve got to have parts and service available,” said Houin. “We can’t afford the downtime, and I’ve seen a lot of older Cat engines that are still running. That reliability really helped seal the decision for us.”

“I just like the difference in noise level compared to 1,800 rpm, so we invested more money up front on the lower-speed generators,” said Houin. “We went up a size when we didn’t have to because it’s better for the long run. Since we’re not running the generators as hard, we are going to have less wear on them.”

The generator sets are important to the waste-to-energy process. At Homestead Green Energy, the cow manure is collected in pools and piped 1,700 feet to a pair of mixing tanks that empty into two anaerobic digesters. Once inside the tanks, the manure is heated and treated with microbes that produce methane gas, which is used to fuel the gas generators. Generator exhaust heat and jacket water heat are used to warm up the digesters as part of the fermentation process.

Beyond odor reduction and the financial return from producing electricity, Homestead Dairy uses the dewatered solids from the digesters as clean bedding for the cows. Additionally, the liquid nutrient byproduct is held in lagoons and used to fertilize the farm fields.

“By turning this abundant substance into an income stream, we’ve made the dairy more profitable,” said Ryan Rogers, plant operator for Homestead Green Energy. “It also helps increase nutrient value, which is great for the environment. The crops absorb the manure better, and odor reduction for the community

is a huge benefit.”

The Homestead Green Energy installation demonstrates the economic viability of smaller-scale, waste-to-energy operations, which could inspire other dairies to do the same.

“I could see many dairies taking advantage of resources they have, and turning a liability, from a pollution/odor standpoint, into a valuable community resource,” said Mike Fenton, a landfill and biogas energy account manager with Michigan Cat. “I do believe there are great benefits for the dairy industry in installations such as this.”

Fully operational since October 2013, Homestead Green Energy has been producing constantly. Both of the Cat G3512A generator sets run 24/7 in a building adjacent to the digesters, and that number of run hours makes maintenance a top priority. When the generator sets were due for their first oil change, Homestead Dairy required some help servicing the valves.

“I called the Dealer, and the next day they were here, no questions asked,” said Rogers. “They understand that the system has to be running, not sitting idle. They are very helpful people.”

Even though it’s estimated that Homestead Green Energy will take five years to break even financially, expansion plans are already underway. Homestead Dairy is preparing to upgrade with the installation of a third digester tank and another generator. Houin is also looking for opportunities to apply combined heat and power to their operation.

“We have a lot of heat that we are not consuming, so we are looking for more ways to use it,” Houin said. “Maybe we will add some greenhouses, or find some other way to capture the value of that heat. That will be another step down the road.”