Note that by entering data in this application for purposes of obtaining driving directions, you are providing such data directly to Google LLC and/or its affiliates.  By clicking "I Agree" or by using the Google Maps functionality to obtain driving directions, you acknowledge and agree that use of Google Maps is subject to the then-current Google Maps/Google Earth Additional Terms of Service at  https://developers.google.com/maps/terms-20180207#section_9_3   and Google Privacy Policy at https://policies.google.com/privacy

Preparing for the Future of Grid-Code

To enable this feature, you must accept the use of targeting cookies.

As growth in distributed energy and other factors increase the risk of instability on electric utility systems, nations and grid providers are tightening grid-code requirements. Developers of distributed energy projects need to stay current with grid-codes and can look to a trusted equipment manufacturer for help with compliance.

Growth in distributed electric energy generation, especially wind and solar and the overall decentralization of power generation is having a ripple effect across the electric utility sector. These sources provide an increasing share of electric power, driven by economics and by social and political momentum for clean and sustainable energy. However, measures must be taken that integration of growing distributed generation and storage do not make the grid less stable than when driven almost solely by large-scale fossil-fuel and nuclear power plants.

In response, in many countries grid-codes are developed and tightened, with which energy suppliers must comply. In turn, energy suppliers, transmissions system operators (TSOs), and distribution system operators (DSOs) must comply (Figure 1). These codes have substantial impacts on the design of distributed energy projects, such as those powered by gas- or diesel-driven engine-generator sets.

At present, grid-codes are evolving rapidly and can vary significantly among countries and grid providers. Distributed energy developers are challenged to stay abreast of these codes, their requirements, and their effective dates. A generator set manufacturer with a track record of projects in multiple countries and with experience in grid-code compliance can be an indispensable source of equipment, expertise, and advice.

To enable this feature, you must accept the use of targeting and performance cookies. 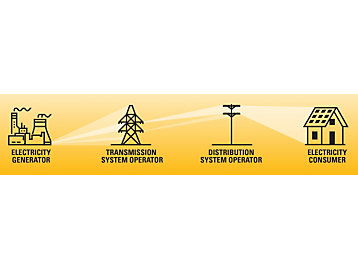 There is little question that solar, wind, and decentralized power are growing worldwide. For example, the U.S Energy Information Administration (EIA) expects wind and solar energy to be the nation’s fastest-growing power sources over the next two years, though longer-term growth projections are more modest. The EIA expects utility-scale solar to increase by 10 percent in 2019 and by 17 percent in 2020; wind is projected to grow by 12 and 14 percent in those years. In the next few years, the EIA estimates that renewables will supersede coal as a generating source.1

Meanwhile the European Union’s original Renewable Energy Directive (2009/28/EC) set a binding target of 20 percent final energy consumption from renewable sources by 2020, and a new directive has set a target of at least 32 percent by 20302. An additional major influence on the grid will be the move of the car fleet to electric. The World Energy Outlook 20183 paints a scenario in which half of the car fleet will move to electric by 2040. This will lead to a further diversification of the power production and consumption distribution in the grid.

At the same time, some regions are seeing substantial growth in efficient, economical, small-scale distributed power production to replace or forestall central power plant construction. In the past, when renewables and distributed energy made up a small share of the power market, the presence of large power stations was enough to keep the grid stable and power flowing. The renewable and distributed systems simply had to trip offline in case of a grid malfunction.

Now that these sources are prevalent, tripping them in response to a grid failure could cause a system blackout. For example, in June 2019, almost all of Argentina and much of Paraguay and Uruguay lost power when generating sources tripped offline, affecting some 48 million people. In another case, in November 2006, power supplies cut out in Germany, France, Belgium, Spain, Portugal, Croatia, and Italy, affecting tens of millions and leading the European Union to seek measures to stabilize the power supply.

Grid-codes are designed to prevent these painful scenarios as well as other disruptions to the electricity supply. The codes specify the system services that grid connected power generators must deliver. Generators must deliver regardless of source or size, to ensure a stable grid. These regulations are not applicable to island mode or standby power applications.

These apply not just to the generator but to the entire generator set and auxiliaries, and to the power facility as a whole.

Dynamic network support includes the ability of the power source to withstand sudden dips or rises in voltage – a capability called fault ride-through (FRT). A generator set must have the capacity to ride through failures on the grid while supporting the network with reactive power to sustain voltage.

Grid-codes are not a new concept, but they are being further developed and expanded in response to growth in renewables and other risks to grid stability. Ideally, grid-codes would be uniform across borders so that, for example, one grid-code could cover all of the European Union (EU). In 2016 the European Commission regulation (EU) 2016/631 known as NCRfG created a framework on which member states must define their requirements by May 2018. In practice, however, even though countries’ grids are interconnected, the national grids have different power source mixes, grid topologies and other unique challenges that dictate different requirements.

Adding to the compliance challenge, some of the member states haven’t clearly defined their national rules within the deadline. Therefore, distributed generation developers are often faced with designing projects to meet grid-code provisions not yet fully spelled out. In addition, beyond grid-codes, individual electric utilities and DSOs have their own interconnection requirements with which distributed generators must comply. This will make sure special conditions in the respective grids are referenced.

Complicating matters, some grid-codes only partially consider technology-based constraints. For example, Standard IEEE 1547, governing interconnection of distributed resources with the grid, does not differentiate the qualities of synchronous and asynchronous generators. There is also the issue of language barriers: In order to fully understand a country’s grid-code, developers need an official translation of it in their native language.

More fundamentally, designers face questions on what equipment requirements will be in force at commissioning and how they will certify equipment and facility compliance. On both fronts, an established generator set manufacturer can be an essential resource.

Generator sets certified or declared as grid-code compliant come from the factory fully tested and ready to install. They often come with oversized generators to better enable to ride through. In addition, system-level engineering may be required.

In addition, controls system enhancements are added including hardware and software modules that interface with the generating plant and utility grid. This assures that the engine generator set operates in compliance with the applicable grid-code. The grid-code controls are designed with substantial flexibility to accommodate a wide range of grid-code provisions, such as different reactive power modes, active power functions, and connection conditions for normal operation or reconnection after mains decoupling.

Beyond equipment, manufacturers can provide a variety of support to distributed generation designers and developers to give them assurance that they can operate in compliance with the latest grid-codes. Caterpillar, for example, provides a simulation model that can be applied to specific projects to demonstrate how the chosen generator sets will react under different sets of grid conditions. The model is validated based on actual factory testing of generator sets against certain grid-code requirements. It can be used to evaluate all of the company’s generator set products for code compliance within the inherent natural limits of the models.

Apart from evaluating steady state and dynamic performance of the power plants, developers are also responsible for compliance with any interconnection and other requirements established by the grid operator. Here, the developer needs to convey those requirements to Caterpillar so that generator sets with the appropriate configurations and ancillaries can be supplied.

In sum, while grid-codes can be complex and their variety confusing, distributed generators need not face the challenge of compliance alone. Caterpillar and its global dealer network have been involved with grid-codes since 2008, when in Germany the medium voltage directive was released, being one of the first grid-codes imposing extended requirements on distributed generation. That experience provides a base of understanding that can add significant value as the concept of grid-codes expands and grows around the world.

With certified equipment and validated simulation modeling, distributed generators can be assured of compliant projects that fulfill economic and strategic objectives while protecting and enhancing grid stability.