Food waste is one of North America’s greatest challenges. Currently, compostable organic material makes up the largest and heaviest portion of the overall waste stream in the U.S., according to the U.S. Environmental Protection Agency.

With more than 50 million visitors to entertainment destinations in Orlando every year, a new renewable energy facility is taking in more than 120,000 tons of organic waste annually and converting it to electric power and natural fertilizer. 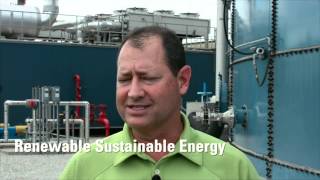 Open Cookie Policy
With more than 50 million visitors to entertainment destinations in Orlando every year, a new renewable energy facility is taking in more than 120,000 tons of organic waste annually and converting it to electric power and natural fertilizer. Operated by Harvest Power, Inc., the Central Florida Energy Garden uses anaerobic digestion to produce renewable biogas, which powers two Cat® generator sets that produce 5.4 MW of combined heat and power—enough energy to power more than 2,000 homes each year. Consulting and service provided by the local Cat Dealer, Ring Power.

Based in Waltham, Mass., Harvest Power chose to install its third anaerobic digester in Orlando—with Disney as its first and largest supplier of food waste—to showcase the benefits of diverting large-scale food waste and other organic materials away from landfills.

“We really built this plant as a showcase to address some of the waste issues associated with having so many visitors, whether that be hotels or convention centers,” says Jeremy Goodfellow, vice president of energy operations for Harvest Power. “By partnering with local companies who can separate their organic waste, we’re able to process it and bring it to beneficial uses.”

That material is blended with fats, oils and grease from restaurant grease traps. The organic waste and grease are mixed together with biosolids from the adjacent Reedy Creek wastewater treatment plant, then pumped into the anaerobic digester tanks.

The biogas that results is about 70 percent methane, which is used to power two Cat G3520C generator sets that create about 3.2 MW of electricity. The digester facility uses about 20 percent of the electricity generated, and sells the rest to the power grid.

After a period of about 30 days, the digested organic material is dewatered, and the solids create a black powdery fertilizer, which is sold to area farmers and nurseries. Heat from the generator exhaust is used to help dry the material.

“The fertilizer is used to grow more food, which comes back to central Florida and is sold in produce markets, grocery stores and restaurants,” says Chris Peters, a regional vice president for Harvest Power. “So it’s a closed loop where the organics that are normally going to landfill and would have been wasted come to us to be used for renewable energy and fertilizer. The nutrients go back into the ground to be reused.”

“This facility really shows what you can do when you put your mind to creating a sustainable environment,” Peters says of the Central Florida Energy Garden, which was fully commissioned in December 2013. “This facility signals a paradigm shift for the region’s hospitality industry as hotels and restaurants are now able to differentiate themselves to customers through environmentally sound waste recycling practices.”

The Cat generator sets are placed inside a specially designed enclosure by Phoenix Products, a division of Cat dealer Ring Power. Switchgear and customer connection points are located just outside the generator room.

Financing for the generator sets and ancillary connections was provided by Cat Financial.

More than a year after the plant began operations, the G3520C generator sets have proven to be very reliable.

“The Cat engines are very efficient and capable of handling the variations in biogas,” says Kelly Saikkonen, a facility engineer for Harvest Power-Orlando. “Here at our site we have biogas storage—a double membrane system—and the level in that membrane fluctuates based on gas production and gas levels. The software that controls the Cat gensets interfaces with our facility software to increase and decrease the load on the generators based on biogas levels. The system works in auto mode, and it’s very efficient in increasing or decreasing the loads on the gensets based on biogas availability.”

Having grown to more than 450 employees, Harvest Power has taken the next step in organics management, going beyond traditional composting of organic matter to creating electricity and thermal energy from those organic materials. The evolution of composting and what organics management will mean to North America is central to the company’s vision for the future. To realize that vision, it takes partners who share the same values, Peters says.

“Having a showcase facility here in Orlando and having partners like Disney, Reedy Creek, Marriott, the Hilton Group and Waldorf—those are large brands,” Peters says. “They are very concerned about sustainability and the environment. So we wanted partners who also held those same values, and we found that Caterpillar and Ring Power wanted us to succeed.

“So it’s a great relationship to have people on your team who don’t care about themselves, but they care about their customers and put the customers first,” Peters says. “We like that.”

Harvest Power counts on Ring Power to take care of the Cat generator sets to ensure they are operating at peak levels. That frees up Harvest to concentrate on what it does best, which is organics management.

“Ring has been with us step by step, making sure that any issues that we have had with the engines or anything with the heat delivery system are resolved quickly,” says Peters. “They have been there to help us maintain it, educate us, and really help us perform to the level that we need for our customers and make sure that we stay online with producing a reliable source of power back to Reedy Creek.”

Read the in-depth details by downloading the Power Profile.

‘The Green Room with John Holden’ featured the unique waste-to-energy solution from Harvest Power and Caterpillar in a segment that aired October 21 on the History Channel.

From natural gas-fueled combined heat and power (CHP) systems and emergency power for facilities, to renewable biogas energy to support the local grid, or electricity generated from coal mine gases, Caterpillar has a wide range of reliable gas power solutions.

Rather than eliminating landfill gas by simply burning it off, Caterpillar can help you turn it into a renewable fuel by providing gas-fueled engine-generators that can produce electric power from landfill gas.