Back to Search
Skip

Back to Search Results

When the power goes out, the team at Highline’s farm in Crossfield, Alberta can’t maintain the highly sensitive growing conditions for the 130,000 pounds of mushrooms produced in its 16 growing rooms each week.

Just days after installation, Highline’s new C18 generator set was put to the test when a snowstorm knocked out the grid power at the farm for a day and a half.

Finning technicians worked with Highline to find a replacement generator set that could support the farm’s power needs and fit within the existing enclosure – a shipping container. 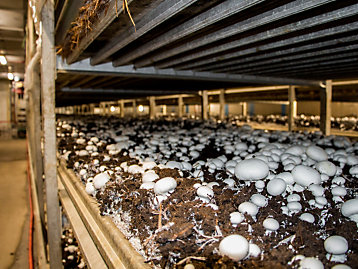 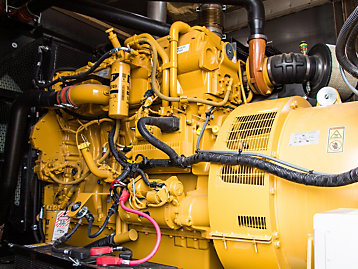 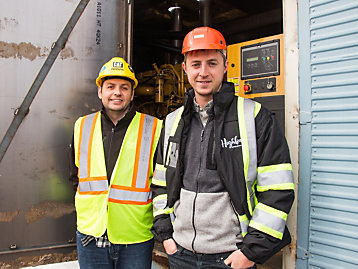 From humble beginnings in 1961, Highline Mushrooms has grown to become the largest organic mushroom grower in Canada. With 10 farms throughout Canada, Highline produces more than two million pounds of mushrooms per week.

With a passion for quality and innovation, Highline has been at the forefront of many great technological advances in the North American mushroom industry. Highly developed cropping techniques have enabled Highline to grow all white, mini bella and portabella mushrooms without the use of any pesticides or fungicides regularly required in the cultivation of mushrooms.

Change is key to Highline’s sustained growth and success. It comes in many forms, such as the adoption of state-of-the-art growing technology or developing processes to do things better. Sometimes it means adding new products and different packaging.

As a growing operation that produces 130,000 pounds of mushrooms per week, Highline Mushrooms can’t afford to lose power that supports a highly sensitive growing process at its farm in Crossfield, Alberta.

At the farm north of Calgary, 16 growing rooms require very specific temperatures and humidity levels at various stages of the growing process, according to interim farm manager Mark O’Brien.

“Without power, we can’t control the temperatures, which are essential to the growing process,” O’Brien says. “It’s a very specific type of environment—a very exact science—and controlling the temperatures in the growing rooms is critical. It could really damage our quality if there is no cooling.”

Until recently, backup power to the farm was supplied by a used 670 kW Cat diesel generator set dating back to 1976 that the grower had acquired secondhand. When the unit finally gave out in February 2019, Highline procured a rental generator set on a temporary basis from its Cat dealer, Finning Canada.

“We got a call from Highline Mushrooms saying that they needed to replace their original backup generator, and we were able to immediately send them a rental unit,” said Bryce Burgeson, the Finning electric power sales representative who took the call. “And we also had the replacement genset they needed in our inventory.”

Originally, Highline just wanted a replacement model of the same Cat genset, but because it had been 43 years, the modern version of that genset would not fit in the existing enclosure—a shipping container.

“Fortunately, we had something in stock even better suited to Highline’s needs,” Burgeson said. “We had just received the new highdensity Cat C18 genset.”

The output rating on the new C18 generator has been increased from 600 to 750 kilowatts of standby power. Previously, a larger unit such as a C27, 27-litre, V-12 genset would be needed to deliver this much power. This high power output can now be attained with the Cat C18’s six-cylinder, 18-litre engine.

The new, high-density C18 genset was the first of its kind to be sold in Canada, and gives Finning a significant advantage over other brands in the same power range.

“Compared to other brands with a similar power output, the C18 is efficient without impacting power capacity, and it has a smaller footprint, increased fuel efficiency and, most importantly, lower upfront capital costs, which is a huge benefit to the customer,” Burgeson says.

The Crossfield mushroom farm has two large boilers and a chiller, which the C18 generator backs up along with the rest of the farm’s electrical load.

“If the power goes down, without a generator, we can’t do anything productive here on the farm,” O’Brien says. “We can’t harvest, we can’t control the environment in our growing rooms, and we can’t pack and prepare our product.”

“After we commissioned our new unit in April 2019, there was a bad snowstorm several days later and grid power was down for a day and a half,” O’Brien said. “For us, the timing was good. We ran the new unit and everything came off without a hitch. Without that power, we wouldn’t have been able to control the temperature in our growing areas. Our new Cat C18 passed the first test with flying colors.”

After the failure of the legacy genset, Highline required a replacement generator set in short order, and Finning had the new C18 that fit inside the existing container. Finning technicians were helpful in identifying and assisting with the necessary modifications to the container in order to house the new C18 genset.

“We didn’t have to wait 16 weeks to get it,” O’Brien said. “There were adaptations that we had to make to the container, and we didn’t realize this until the Finning guys showed up. So that delayed us for a few weeks. Once the technician came out, we got to work and started making those changes. The technician was very good and worked very well with our master electrician to complete the necessary modifications.”

The Crossfield mushroom farm is planning to add an additional 16 growing rooms. O’Brien says plans call for the addition of another Cat genset to back up the new area, as well as the entire farm if the other generator set is not available. The new generator will include an automatic transfer switch and a factory enclosure.

“The Cat generator is a safety net for us,” O’Brien says. “It’s something we can’t be without.”

callCONNECT WITH YOUR DEALER TODAY