THE UNIQUE GENESIS OF THE CAT® TH55 OILFIELD TRANSMISSION

You know it as the most powerful, longest lasting transmission available for well service. But do you know the TH55’s rather unusual history — like the fact that it was born in a mining truck or that it owes some of its success to a lack of sales during the Great Recession?

Rodney Harms, today an NPI program manager for Cat® articulated trucks, was a design engineer on the team that brought this oilfield transmission to market, as well as the field follow engineer who helped get the first 33 units running on frac rigs. He took us back almost two decades to the birth of the TH55.

Q: The TH55 was (and still is) a mining truck transmission. How did it end up in well service?

Caterpillar got into rigid-frame trucks in the 1960s and always made the transmissions. By the late 1970s, larger trucks were needed, and Caterpillar responded with a truck that incorporated the TH55’s predecessor. Horsepower and size continued to grow, and by 1991 the 793, using a mining version of the TH55, was in production at more than 2150 horsepower. Caterpillar was committed to mechanical transmissions for mining where other manufacturers didn’t have large transmissions available. The TH55 continued to evolve for mining trucks, and over the years it has grown in power and durability.

Fast forward to the early 2000s, when a team from one of our customers was visiting the Caterpillar engine facility in Lafayette, Indiana. We were building 3512 engines for their frac trailers, and they said, “We really like your engine — if only we could have a transmission that was as good as a Cat engine, we’d really have something.” One of the guys on that tour had been through a training program with someone who worked on transmissions. He called him up and the rest, as they say, is history.

Q: It wasn’t really that simple, was it? How did you get from idea to reality?

At the time, Caterpillar collaborated with and supplied parts to an external company that incorporated the core of a TH48 transmission from the 777 truck into a well service product. Honestly, it didn’t live up to our standards, so we bought the intellectual property and brought the product development back in house. That product became the successful TH48-E80, which has evolved into the current CX48-P2300.

At the same time, the team was listening to customer needs and recognizing that shale was catching on. Frac operators historically wanted equipment that didn’t require road permitting, but with shale formations coming into production, they were starting to require more power, which challenged equipment weight.

The TH48 was rated at 2250 horsepower, so the team decided to start fresh with a bigger transmission and brought the TH55 over from the 793 truck, where it had 3000 horsepower capability. At first people thought the product was too big and heavy, but as the shale gale continued most of the market migrated to 2500 horsepower. The product really hasn’t changed much since those early days — just small tweaks and improvements.

Mining and oil and gas customers have a lot of similarities, actually. They’re both 24/7 industries where equipment doesn’t sleep and customers demand outstanding reliability and durability. The TH55 proved itself in mining over millions and millions of hours, but it’s not exactly the same transmission for oil and gas.

The big difference between a transmission on a mining truck and a frac rig is how you shift it. In a vehicle application, when a transmission shifts, the vehicle has inertia to carry the speed while the gear change occurs. On a frac rig, though, there is little inertia to help the transmission complete a shift — it’s like hitting a brick wall while shifting.

Without specifically developed software, the pump would stop and you’d burn up the clutches or break shafts and related parts. The Caterpillar development team spent millions understanding application needs and developing clutch tuning that enables the TH55 to shift extremely fast. The torque capability combined with the advanced shift capability is what sets it apart.

Q: How did you convince oil and gas customers to try out the TH55?

We introduced 33 TH55s with two pioneering OEMs just in time for the global financial meltdown and the Great Recession. Those were our field-follow units. We didn’t get any new sales, but those 33 units kept running and people kept watching them. In 2010, when the market exploded, and customers wanted more power for new shale plays like the Marcellus and Eagle Ford, they turned to the TH55. By the end of 2011, Caterpillar had shipped 1,200 units. The Great Recession helped us get all those hours on the first 33 units, and that proved to the industry that the TH55 was well designed for the market.

Q: Why do well service operations keep buying the TH55 all these years later?

Customers want engines and transmissions that are well matched. At 2500 horsepower, the TH55 pairs well with high-powered engines. Competitive transmissions were originally designed for a power level less than half of that. That means they wear out faster, and rebuild costs are significant — 40-50 percent the cost of a new transmission. The TH55 with two rebuilds will last anywhere from 30,000 to 40,000 hours. That’s four to five times longer than the competition. It sells itself.

Q: There are two TH55 models available today, the E70 and E90. What’s the difference?

Early in the development of the TH55, the design team had to decide what gear ratios to use. Because of their mining background, they chose ratios that would fit best in a hauling vehicle and with the Cat engine lug curve — ratios that also allowed for the deepest first gear ratio in the industry (6.25:1). That product became the TH55-E70 (with seven speeds forward and zero reverse gears).

Since pressure pumping companies typically run pumps at rated engine speed, that seven-speed transmission allowed them to use three gears while pumping a job. But it soon became obvious that some customers would benefit from additional gear choices in that typical pumping range. By modifying a single set of gears, the design team created a new set of gear ratios with nine forward speeds — still maintaining a first gear ratio deeper than any competitor (4.67:1). That’s the TH55-E90.

This design lets customers use five gears with finer control in the typical pumping application. The TH55-E90 came to market in 2012, shortly after market expansion slowed, allowing it to gain a reputation for durability and performance during an industry trough similar to its predecessor.

For customers who want the deepest first gear ratio in operations requiring extremely low flow rate, like pump down or coil tubing, the E70 is ideal. For those who run in well stimulation applications, the E90 provides more options through the typical pumping range. From the outside, the two look identical and the installation and controls are the same, providing design commonality for OEMs.

Ideal for pressure pumping applications, Cat® TH55-E70 transmissions are optimized for use with Cat 3512C, 3512E and 3516C engines.

Cat oil and gas transmissions deliver proven performance in applications worldwide. You get more power with fewer trailers, plus innovative electronics that help you work smarter and harder. 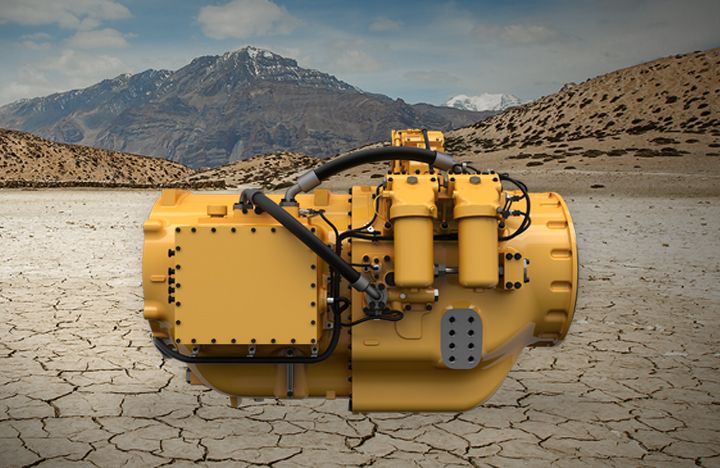 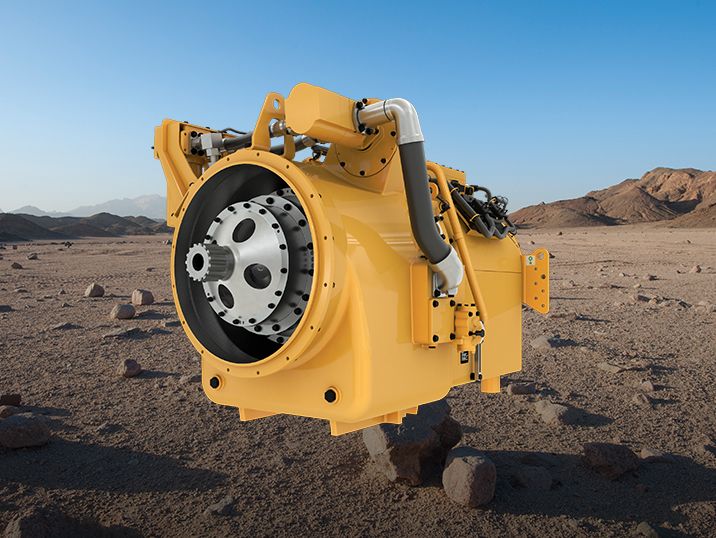 Coming Soon: A New Cat® PTO For Your Frac Transmission 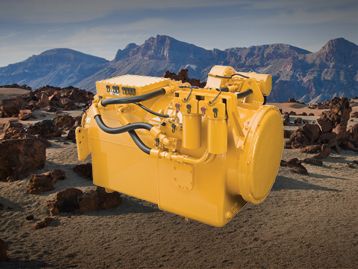 Our full line of well stimulation pumps are designed and manufactured by Caterpillar, in Caterpillar factories for single-source package confidence.

Get the detailed specifications of Cat® Oil & Gas solutions needed for your projects right at your fingertips.

Need help determining which well service product meets your needs? Your Cat® dealer can help you find the right model and ensure that your equipment is operating correctly to help you get the job done.

Talk to Your Dealer
Footer
warning